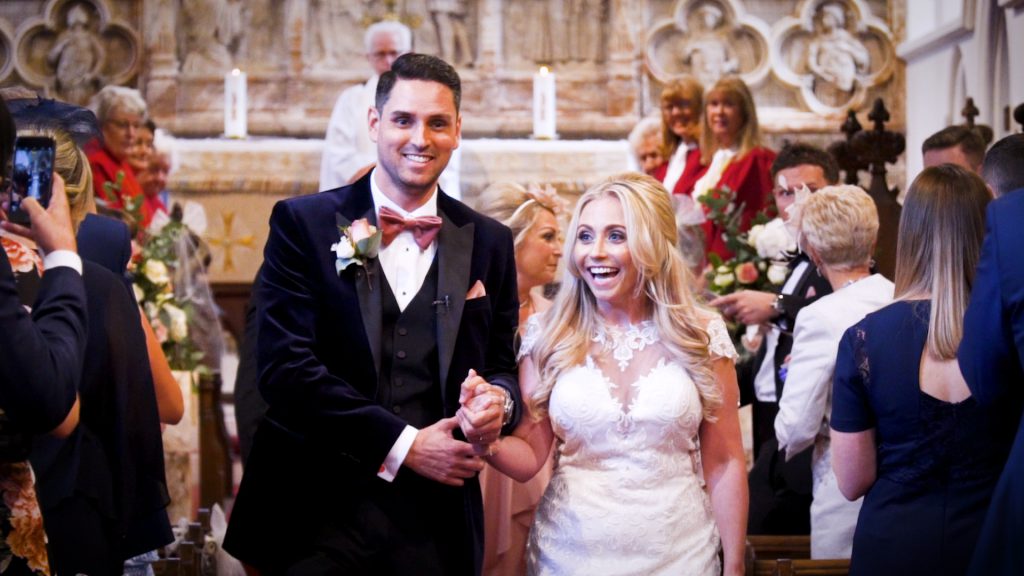 Faye and John had chose the Bronze Package for their wedding videography. I made my way to Brentwood in the morning and first made a stop at Saint Paul’s Church of England in order to capture some camera shots of the church in the calmness of the morning. If time is permitting, this is always an ideal time to capture some shots of the church and its grounds whilst it is empty.

The beginning of autumn was apparent with the colours of autumn beginning to show. Trees and shrubs transitioning to different shades of red, yellow and brown. Some signature shots which you will often see in Luxe Wedding Films includes cinematic gimbal shots. I was able to succeed in capturing one of these said shots for the into sequence of the wedding film.

Once I had captured what I had needed to capture at the church I began making my way to De Rougemont Manor which is where Faye was beginning her bridal preparations. I was delighted that Faye and John had chosen to undertake a card reading each on camera. Card readings are always an extra nice touch to a wedding film. I would suggest that card readings are a brilliant touch for a shorter wedding film such as a wedding highlights film. We will ask couples to read the entirety of the card which then gives us leverage on which parts of the reading to use in the film.

Once I had captured morning bridal preparations with Faye and her bridal party, I made my way back to the church where I had just come from. With the Highlights Package, we always aim to arrive at the church at least one hour prior to the brides arrival. This leaves room for additional establishing shots of the church and this also supplies a superb opportunity to capture shots of the cherished family and friends arriving at the wedding.

An additional reason for arriving at the church early is to allow for shots of the groom before the formalities of the day commence. These shots are not posed but captured in their true beauty which usually allows us to also capture the atmosphere of the day. Once all of the cameras were set and microphones placed, I then made my way outwards to the front of the church to capture Faye arriving in her beautiful wedding car.

The ceremony lasted for approximately thirty minutes, after which Faye and John had some photographs taken with their photographer called Josh from Lindrum Photography. I captured some natural shots of their wedding guests embracing the post-ceremony celebrations. Afterwards, me and Josh then captured the confetti shot of the newlyweds. As soon as the confetti shot had been completed we made our way back to the venue for the rest of the De Rougemont Manor Wedding.

Prosecco in addition to other drinks and canapes were served to family and friends whilst we captured some newlywed shots of both John & Faye. After this it was soon time for them to make their entrance as Mr & Mrs for the first time.

The speeches commenced with Faye reading a poem which she had written for John. After this, Faye’s dad delivered a speech followed by John himself and then his best man. The speeches ran for approximately three-quarters of an hour. Not long after the speeches had finished it was time for the cake cutting. We were reminded that summer had now come to an end and before we had realised it the beautiful sunshine outside had disappeared and had been replaced by the dark evening sky.

Once the cake cutting was complete it was almost time for their first dance together as man and wife – however before that it was time for a game of ‘Mr & Mrs’ from the iconic game show. It was a draw!

Many congratulations to Faye & John on their lovely wedding day. It was a privilege to meet this special couple and also a delight to meet their little son. Wishing them a very happy future as a family. I look forward to another De Rougemont Manor Wedding in the future.

If you are thinking of getting married in the Essex area, then I would recommend having a look at De Rougemont Manor as a potential wedding venue. It is located just inside Brentwood, Essex. You can find them online at https://www.derougemontmanor.com you can also contact them by 01277 226 418 or info@derougemontmanor.co.uk