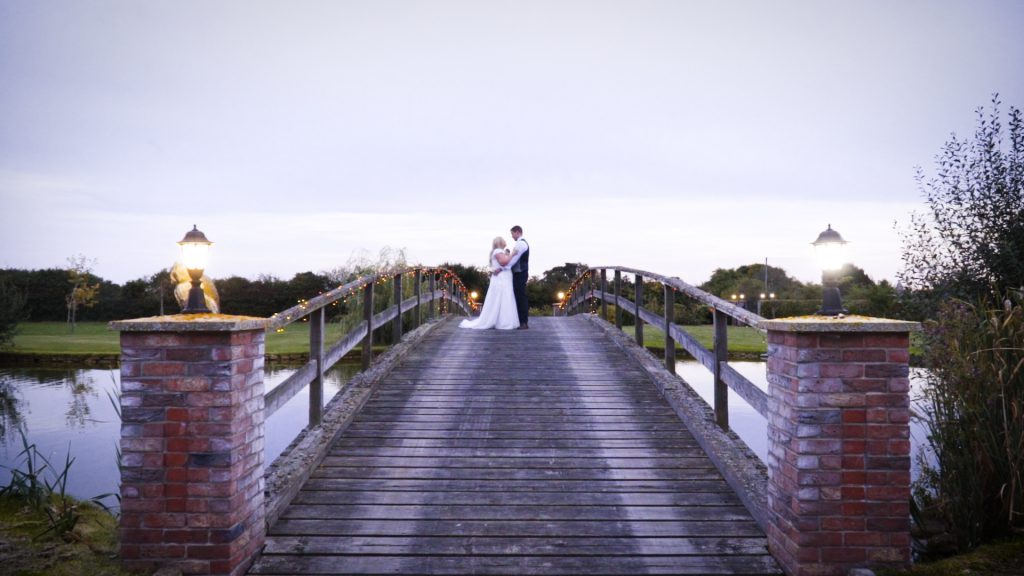 It was a rare occasion that this wedding was only a ten minute car journey from my house. Being a wedding videographer for such a local wedding was great! It was also great to be able to film at a local church of mine which I had not shot at before. As soon as Hannah & Johnny had gotten in touch we immediately began discussing the details of their day. The wedding reception itself was hosted by Hannah’s parents in Tendering which was a extra nice and special touch to an already lovely wedding day. The church ceremony itself took place at Thorrington: St Mary Magdalen Church. The church itself serves the parish in which I actually live in which was quite unique for me.

The wedding film preparations commenced a few days prior to the actual date of the wedding. I had agreed to come and meet Hannah at the wedding venue so that we could make sure I managed to capture some particular camera shots which I knew Hannah was looking for. One being a shot of the gates of the venue opening. We managed to achieve this using my gimbal which provided a nice smooth tracking shot. I prompted Hannah at a specific time to open up the gates which would eventually mean that the shot ended once I had gone through the gates. The shot turned out great and worked very well in their wedding film – a great way to start the film off. Hannah also asked me to capture a ‘Welcome to Thorrington sign which featured in her grandparents wedding video. A wedding videographer always likes to capture these special shots which mean a lot to a couple.

After capturing the above intro shot to the film and sign I made my way to St Mary Magdalen Church so that I could take a look at the church. As the weather was perfect I decided to capture a few establishing shots of the church exteriors whilst it was empty. Unfortunately I was unable to get inside the church but that wasn’t a problem as I had allowed enough time to do this on the wedding day itself.

The wedding day itself soon arrived a couple of days later. A beautiful autumns day was emerging which as a wedding videographer, I was thankful for as it was the same weather as the day in which we captured their intro shot to the wedding film. I arrived with Hannah at approximately 10:00am and spent just over an hour with her and her bridal party. I captured all the usual must have shots including the wedding dress, the morning preparations as well as some additional venue shots. I knew that Hannah was going to arrive to the church in a beautiful wedding car therefore I ensured that I had left enough time to be at the church ready for her arrival.

I arrived at the church and was greeted by the vicar who was going to be taking the service. After being briefed on where I was permitted to place my cameras I captured some additional establishing shots of the church but this time mainly focusing on the interior of the church. After this friends and family soon began to arrive which meant that it was almost time for the formalities of the day to commence. I rigged all of my tripods and microphones inside the church and then took my gimbal outside to be ready for the arrival of Hannah in her wedding car.

As a wedding videographer I have multiple different shots which I find often help to make a wedding film. The arrival of the bride to the church is always one which I do like to try and achieve if a church wedding is on the agenda. I stood outside with Kelsie Low who was providing the wedding photography for the day. Once the car arrived just before heading back into the church I managed to get one last shot before the ceremony of both Hannah and her proud dad.

The service went on for approximately thirty minutes. As always, before we knew it the end of the ceremony had come and Hannah and Johnny were officially husband and wife. They made their exit from the church through a tunnel of confetti. The confetti shot is another shot which I love to capture. All of the movement and happy faces make this a great shot.

Afterwards everyone made their way back to the wedding venue which initiated the cocktail hour. Hannah and Johnny were congratulated by their family and friends and posed for the odd picture here and there. The canapes and celebratory drinks began pouring out of the kitchens. Hannah and Johnny had chosen to have a big group photograph of them with all of their family and friends. There was a cherry picker nearby which Kelsie the photographer was offered to go up in to capture the shot. I managed to capture a unique shot of this enormous cherry picker with all of the family and friends from a distance. After this we took both Hannah & Johnny off for some romantic newlywed shots.

An important part of being a wedding videographer includes capturing the wedding speeches. I began preparing for the wedding speeches after capturing some additional shots of the guests enjoying themselves. The speeches commenced with Hannah’s dad delivering his speech, he came up with quite a creative way to deliver his speech! Johnny then delivered his speech followed by his best man who is his brother.

Once the speeches had concluded the next part of the wedding day was approaching – it was soon time to capture the cake cutting and first dance. Before we did this though myself and Kelsie took the newlyweds for a stroll around the grounds for some last romantic newlywed shots. I managed to get a cinematic gimbal shot of both Hannah and Johnny standing on a beautiful bridge going over a large pond. The day light was beginning to disappear very quickly so we made our way back to the marquee with the rest of the wedding party. It was time for the cake cutting followed on by first dance. The evening reception then truly started after the final formalities of the day were complete. I have no doubt that the party went on until the early hours of the morning!

Congratulations Hannah and Johnny on your lovely wedding day. It was a pleasure to be your wedding videographer. I’m sure we will bump into each other again soon.